Ahooooy I’ve been making a guaranteed-100%-unmarketable lawnmowing game lately, as a way to do some creative rejuvenation. It’s gonna go on itch whenever it’s done…which will be…I think in the next few weeks!

I’ve been posting updates throughout its development so far in one big twitter thread - here are a couple highlights so far (scroll up/down to see other progress, the thread is kinda big!)

Current gameplay (in a “draw this shape” map)

I’m looking for playtesters, so lemme know if you want to give it a go! It’s maybe an hour long, maybe less, and you can play through “almost all of it” as it stands, but it suddenly stops progressing right near the end (the finale isn’t done yet). I’ll put your name in the playtesters section of the credits if you give me any feedback!

I don’t know why you think this is unmarketable. If you can make this work in a multiplayer modality (normally I would not suggest “just make it multiplayer” but in this case you wouldn’t need to model a lot of direct interaction so I would think that it would be [relatively] straightforward and slap a timer on it you have a solid party game premise. Alt take: daily seeded lawns people can play and score like wordle.

HMMM some kinda “multiplayer-lite” feature seems compelling, but I’ll need to think about how to include that without blowing out my scope! Currently as far as it gets is including the map-editor I used to make the main levels, but asking people to save/load their own files is like…people definitely won’t use that as much as they would with some more-integrated option.

a wordle-style daily-challenge is compelling…I wonder if I can get the webGL version to save a screenshot of a “you win, here’s your time” screen. That, combined with a date-based randomized map, could be pretty neat, and wouldn’t need any hosting…

For now, here are a couple little clips so this thread won’t be entirely text!

A bit of mowing:

Sprinklers make your (apparently electric) mower freak out a bit:

This looks great. Agreed on it not being “unmarketable.” Literally my first thought was “how is this unmarketable?!?!” I would be more than happy to test it out.

Also, the text rendering is awesome. Would love to see that available as a library.

and coooool testers always appreciated, so thanks @ahribellah! i’m fixing some edge-cases with keyboard/gamepad menu-nav at the moment, but i’ll message you a build-link in a little bit!

not super exciting, but such is life when you’re getting close-ish to finishing a game: added a pause screen (based on some feedback from @ahribellah)! don’t tell Captain Unity, but this turned out to be really quick to add because i avoided using Unity-4.6-UI, and instead relied on the textmode API which i had made for the main menu.

and then here’s a more-fun one: when you cut the grass, it gets “combed” in the direction you were moving in - as a result, you can sorta feel the route in a screenshot of a completed lawn 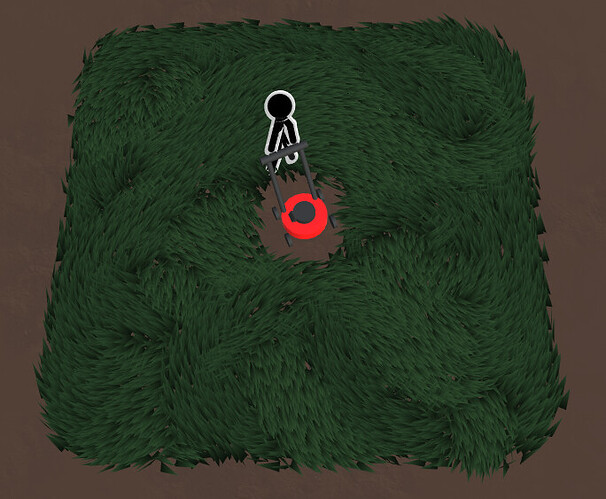 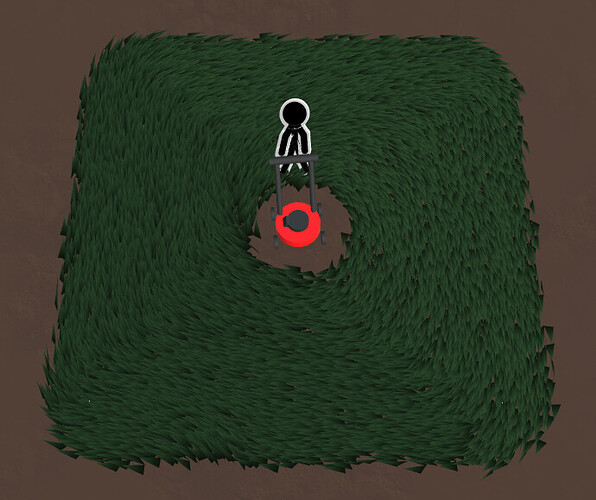 oooh nice I like the combing storytelling. good stuff!

whelp, the game is probably finished now, and i’m releasing it (on itch) tomorrow morning!

i made the mistake of only playtesting with other gamedevs until the last minute (lol, dumb) so i didn’t realize how obtuse tank-controls would be for someone who wasn’t already familiar with that type of input - so i made an eleventh-hour change, and now the default movement style is omni-movement, but you can enable tank-controls as an optional “hardmode” cheat.

since the omni-movement style allowed the lawnmower to move sideways, regular wheels started looking weird and slidey…so now, when you don’t have hardmode enabled, you get these funky orb-style tires which can rotate in any direction:

aaaand the game is done! you can play it here - the full game works in a browser, but the desktop version runs a bit faster and allows fullscreen mode (minimum price is $0)

congrats! looking forward to trying it out!